While I’m waiting on the supper to get cooked I’ll get this started.  Your letter of May 24 was the last one that I got.  I suppose that Iowa is looking lovely now after the long winter and cold spring.  I trust this time of the year you aren’t having it too coolish.

My girl is standing here and is wanting to know how this writes words so I just gave her a demonstration.  They are funny and she is quite a character for a kid.  She is doing all of my house work now that Wyn is away.  When she comes back we will get another one to help her.  I should send a picture of her to you.  One of these days I shall.

Since I started this letter I have eaten my food.  I had a meat dish, ground-up meat mixed with an egg and some peppers chopped into it and baked in the oven and with that I had a few canned peas.  I had a paw-paw for dessert.  It will be nice when Wyn gets back.  This is plenty lonesome eating alone, etc., but as long as I have plenty to do I don’t mind.

It sounds as if the men work the clock around but I guess that is the way to do so as to get the crops in.  It was too bad that you didn’t get to hear Loveless.  Sentman wrote me and he said that Loveless had had quite a serious operation so perhaps it was his health that kept him from being there.

Is Lois home now or has she gone to Kansas already?  I’ve forgotten when she said that she was going.  I have all sorts of things thought up to do with that money which she said that she had for me.  I think that I shall get a chair and a record player (that is what they are called now isn’t it?)  There is quite a good kind that can be gotten out here and I thought that it would sure be nice to have and perhaps some of my “hamas”1Shona for relatives can send me some records once in a while and I can have music when I like.  My radio seems to be getting weak so I suppose that the batteries are going down although I don’t think that they should be.

How does your radio work?  I guess television keeps right on coming to the front.  Doesn’t it?

I guess that I forgot to tell you that the tea which you sent is very nice.  You know that I couldn’t seem to get good tea at home but, you know, I believe that the reason lies with the water.  Water has a lot to do with making decent tea.  The chemicals, etc., make the difference.

I made ice cream with that ice cream powder which you sent.  I liked it so much but I couldn’t get it to beat up the way you did.  In fact I could hardly get the egg beater to move in it.  I doubt if anyone can whip it up as well with a hand beater.  That egg beater which I have is a swell one as you remember, but it isn’t electric.  When you send a box you can always send more of that powder if you want, too.  And those bread papers, I can use all that you send out.  And it is always a welcomed gift to the other missionaries so send it in the boxes if you can be troubled with keeping it.  I really hate for you to send meat, etc., out here when I know that it is so expensive for you to get even for yourselves.  The next time that you get the yen to send me a tin of that ham, buy it for yourselves and consider that it is on me.  Really don’t do it again.  We can buy that in Salisbury, but being that it is expensive I don’t get it.  Anyway I don’t really need it.

I covered a chair for my bedroom and if you saw it you would get the yen to cover those upstairs.  It really is nothing to do and it does the trick as far as looks go.  I shall draw a picture of it if I don’t forget before I finish this letter.

I went out yesterday to begin village work.  The people are still in their fields for the most part but we found enough so that we could have a meeting.  I really love that work.

School goes along as per usual.  Nothing very exciting happens.  I have opportunities though for the Lord and I guess there doesn’t need to be the spectacular.  I sometimes wish something exciting would happen as the routine gets tiresome.  Yesterday a policeman from Darwin and the hunter from across the river were here for a while and they were rather interesting.  The policeman came from New Zealand a year ago and he was rather interesting to talk to.  Sometimes we get dead-eggs that come in here and are so uninteresting but then we often get the other type.  Farmers for the most part.  This letter will be going back to Darwin with that policeman.  He is coming over tomorrow to get any post which we might have to send with him.

Did I ever tell you that I enjoyed that pop corn?  Anyway I did and I believe that my girls did, too, as it went down fast.  That is something that you can always send again.

How are the pigs, chickens, garden, etc.?  I suppose that the garden is a bit too much for you so I wouldn’t worry too much about it, although I would certainly miss a garden if I were there.  Say, do you have any strawberries this year?  I remember the crippling experience which I had with them last year.  Do you?

Well, I must get on to some other letters.  I trust that this finds you all well and not working too hard.

As usual I can’t draw anyway.  I have a back that slips down over the back and then the piece for the seat and the flounce on the side all go together.  I just have a ruffle around the bottom – Ha. 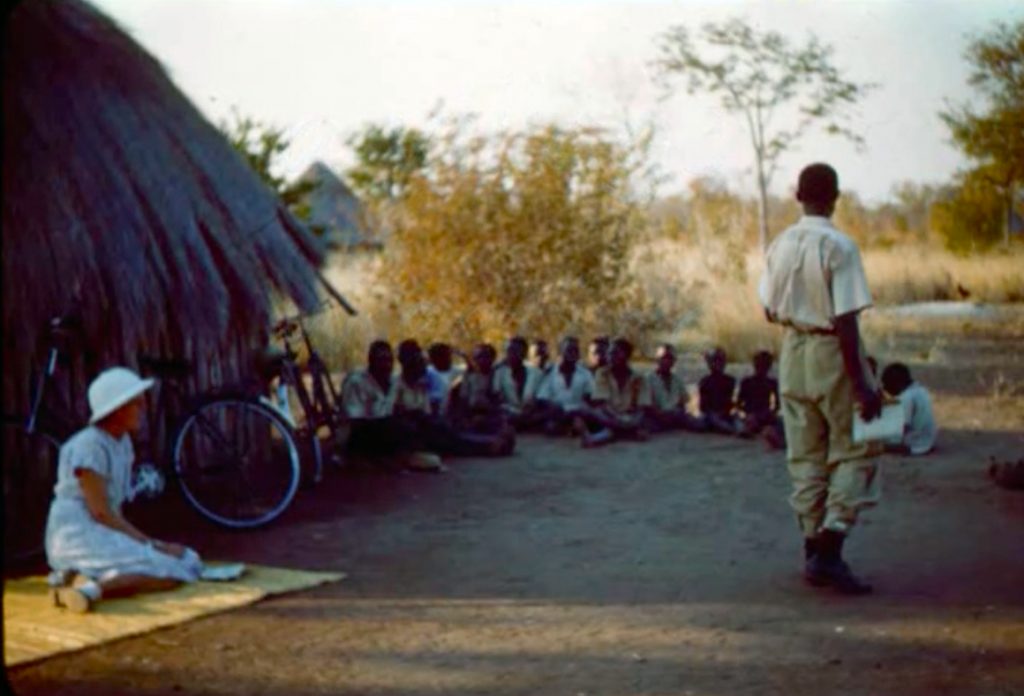